Trending Now
A Primer on Free Testosterone and Your Health
The Complex Science of Erections
7 Physical and Psychological Factors that Cause Low...
The Lowdown Between Testosterone Replacement Therapy and Anabolic...
How to Keep Your Testosterone Levels High in...
Stress, Anxiety, and Sex: How Do They Interact?
The Lowdown on Ejaculations and Aging
8 Vital Nutrients You Need More Of (To...
Is Daylight Saving Time Screwing Up Your Sex...
Anabolic Steroids: Friend or Foe?
Home Men's Health THE LOWDOWN ON CORTISOL
Men's Health

THE LOWDOWN ON CORTISOL

Cortisol has been popularly dubbed as the “stress hormone,” giving it a misconception that it is inherently detrimental to a person’s health. On the contrary, cortisol is a hormone that is necessary for the healthy and natural fight-or-flight response to perceived dangers and stressors.

Besides responding appropriately to stressful situations, this hormone has other functions in the body, including managing blood pressure, reducing inflammation, and assisting in the metabolism of the macronutrients such as protein, carbohydrates, and fats.

Cortisol may only produce adverse effects when its levels are not balanced, whether too high or too low. On the one hand, increased cortisol levels can suppress the immune system, disrupt metabolism, and increase fatigue. On the other hand, low levels of this hormone can cause weight loss, tiredness, nausea, lightheadedness, and other signs of overall body weakness. This article discusses how cortisol levels affect your health and what you can do to manage it.

Cortisol, also known as hydrocortisone, is a steroid hormone produced by the adrenal glands. Cortisol is released into the blood, traveling throughout the body. Receptors of hormones like cortisol are found almost throughout the body; hence, this hormone impacts virtually all the body’s organ systems.

Regular, balanced cortisol levels are responsible for various functions. It is normal for cortisol to go up for the body to stay alert, appropriately adapt and protect itself in any given situation, particularly stressful ones that may bring harm. Besides dealing with stressors, cortisol regulates blood sugar, manages the energy supplies of the body by assisting in the metabolism of macronutrients, acts as an anti-inflammatory, and plays a role in the body’s sleep-wake cycle.

What happens when you have high cortisol levels? 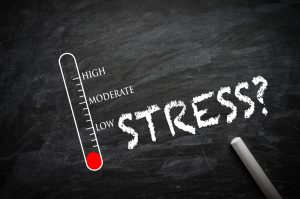 Though it is entirely normal for cortisol levels to increase when responding to stress, prolonged elevation may be detrimental. When cortisol levels are consistently up in response to prolonged stress, the immune system weakens that makes the body more prone to pathogen attacks that can eventually lead to infection and more severe conditions. Alongside a weakened defense system, sustained high cortisol levels can also continuously produce glucose, subsequently increasing blood sugar levels. This may further lead to fat and weight gain since the body requires more food to provide energy that is continuously being depleted by stress. High blood sugar due to elevated cortisol can also lead to more severe conditions like diabetes.

Cortisol also stimulates epinephrine activity, and sustained epinephrine surges due to an increase in cortisol can impair blood vessels and arteries. Consequently, this leads to increased blood pressure, making the body more susceptible to heart attacks or strokes.

There are also severe conditions caused by other factors besides stress that lead to high cortisol levels or hypercortisolism. For example, a rare condition called Cushing’s syndrome happens when the human body is exposed to increased cortisol levels for a prolonged period, typically caused by certain tumors found in adrenal glands or pituitary gland that stimulate the production of extra cortisol or caused by excessive use of corticosteroids or drugs generally prescribed to patients with chronic inflammatory diseases, such as arthritis and lupus.

Cushing’s syndrome’s distinct signs and symptoms include a disproportionately enlarged abdomen relative to thin legs and arms, reddish stretch marks, a round reddish face, a fat bump or swelling in between the shoulders, and poor skin that heals slowly and poorly. Other symptoms may include chronic fatigue, headaches, hypertension, mood changes, and weak muscles. In addition, females may experience specific symptoms, like irregular menstruation and excessive body hair.

Tumors that cause this syndrome can be treated through surgery or radiation. For those exposed to the prolonged use of corticosteroids to treat their existing conditions, their attending doctors may gradually reduce dosage to a low level that can still manage the current ailment. Doctors may also prescribe a non-glucocorticoid instead. 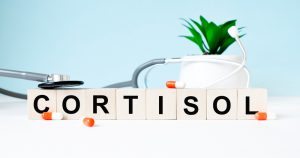 Hypocortisolism or low cortisol levels may manifest in a condition called Addison’s disease. Also known as primary adrenal insufficiency, Addison’s disease is a condition in which adrenal glands do not produce enough cortisol. Common symptoms include fatigue, lightheadedness, weight loss, hypotension or low blood pressure, and skin hyperpigmentation, among many other symptoms.

Primary adrenal insufficiency is caused by an autoimmune response that happens when the body’s immune system attacks its tissues and organs instead of performing its normal function of protecting them. The organs being attacked, in particular, are the adrenal glands, where cortisol is produced.

Symptoms may further be aggravated by stress. For example, there are cases when intense, stressful situations can result in a quick manifestation of severe fatigue, nausea, and vomiting, mental confusion, decreased blood pressure and increased heart rate. This condition is called Addisonian crisis or acute adrenal insufficiency, which is considered a severe, life-threatening condition that needs immediate medical attention. If left unnoticed and untreated, it may lead to unconsciousness or even death.

For prolonged, stress-related cortisol levels, individuals can manage with better stress management without the intervention of medical treatments. There are various ways to cope with stress and prevent the adverse effects that come with it.

When it comes to physical health and fitness, exercise and maintaining a healthy and balanced diet help reduce stress. In addition, avoiding smoking and drinking alcohol and just getting adequate rest and sleep will help in stress reduction.

Besides maintaining a healthy body, maintaining an excellent mental and emotional state is also necessary to bring down stress levels. You may engage in calming activities such as mindful meditation, yoga, or even just breathing exercises. Take a break from your work to pursue hobbies and allow yourself to recharge. Having healthy and supportive relationships with low conflicts can also alleviate stress.

Suppose stress continues for a prolonged period that adversely affects your physical or mental health, relationships, productivity, or overall sense of wellbeing. In that case, it is recommended to consult a general practitioner or a counselor.

THE ESSENTIALS OF EXERCISE DURING A PANDEMIC

Here’s How Boosting Testosterone Can Help Boost your Confidence