Trending Now
A Primer on Free Testosterone and Your Health
The Complex Science of Erections
7 Physical and Psychological Factors that Cause Low...
The Lowdown Between Testosterone Replacement Therapy and Anabolic...
How to Keep Your Testosterone Levels High in...
Stress, Anxiety, and Sex: How Do They Interact?
The Lowdown on Ejaculations and Aging
8 Vital Nutrients You Need More Of (To...
Is Daylight Saving Time Screwing Up Your Sex...
Anabolic Steroids: Friend or Foe?
Home Men's Health 8 Nutritious, Protein-Rich Seafood to Incorporate in Your Diet
Men's Health

It is generally considered that regularly eating seafood is a healthy practice. However, it is important to note that even various types of fish still differ in nutritional value. Some of the healthiest known kinds of seafood contain omega-3 fatty acids, which gained popularity due to their ability to promote cardiovascular health.

Recent scientific studies also suggest other additions to the health benefits associated with eating seafood. Supporting brain health and improving mood is another benefit that is recently discovered. Not only limited to that, but seafood is also rich in other nutrients and minerals. Some examples include protein, iron, selenium, and B vitamins. 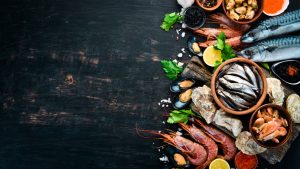 One survey focused on the seafood consumption of Americans reveals that only one out of ten people meets the recommendation of consuming seafood at least twice a week. There are various obstacles related to seafood consumption. The first is there are various types of seafood. However, it is not common knowledge which ones offer the highest nutritional value. Seafood is usually more expensive than foods rich in protein—this can be a serious hindrance to eating seafood. Another barrier is that some people are confused or do not know how to cook different types of fish. 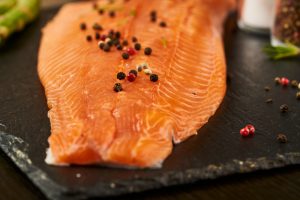 One type of fish known to contain omega-3 fatty acids is a type of fatty fish called salmon. Apart from that, salmon is also rich in naturally occurring vitamin D, which is rare. Three ounces of salmon has 570 IU (international unit) of vitamin D. This amount already exceeds the daily recommended value of vitamin D for both adults and children aged four years and beyond, which is 400 IU.

Salmon bones are rich in calcium which supports in absorbing vitamin D. Particularly in canned salmon, the bones are safe to eat even for children. Another option is to ground the bones for added safety. As for canned salmon, there are two types, either canned in water or oil, which can be relevant for restricting or increasing calorie and fat consumption.

Just like salmon, tuna has high levels of omega-3 fatty acids. In addition, tuna also contains vitamin B3 or niacin. Both omega-3 and vitamin B3 assists in managing cholesterol levels. However, the quality of tuna varies the amount of niacin present in the fish. There is 16 mg of niacin in a 3-ounce serving of fresh yellowfin tuna. On the other hand, the amount of niacin present in a 3-ounce serving of canned tuna is lowered to 11 mg. However, this should not be a reason to look down on canned tuna. Nevertheless, it is still important to achieving the recommended daily intake of niacin, and other nutrients, so don’t be picky. Another factor to consider is the price—fresh yellowfin tuna costs more than $20 per pound, while canned tuna ranges between $2 to $7.

Cod is a meaty and mild-flavored fish characterized by its white meat. The nutritional benefits of cod include being a rich source of vitamin B12 and protein yet low in fat. One can already attain 15 grams of protein from a 3-ounce serving of cod. Furthermore, over 30% of the recommended daily value of vitamin B12 is present in a single serving of cod. Another good thing about preparing cod is that its meaty texture allows it to withstand different cooking styles without disintegrating.

Sardines are known for being an excellent source of calcium. Similar to salmon, most of the calcium is found in the bones of sardines. The bones in canned sardines are soft enough to be eaten, so remember to include eating those. One serving of sardines already provides 40% of the recommended daily value of calcium, making it a perfect alternative to dairy products. In addition to calcium, sardines are also rich in vitamin B12, selenium, and phosphorus.

Shrimp is known for its versatility because it can be cooked in different types of dishes. Shrimp can be used as a topping in spaghetti, a taco filling, or be made into soup—the possibilities are endless.

Perhaps the most notable nutrient that shrimp offers is protein. Consuming only 3 ounces of shrimp already provides 20 grams of protein. In addition, a single serving of shrimp already contains enough recommended daily value of selenium. The list of the nutritional benefits of shrimp extends even further—vitamin B12, choline, iodine, phosphorus, and copper. All of these are vital in facilitating thyroid health, cardiovascular health, and the immune system.

Oysters are another type of bivalve shellfish, just like scallops and clams, that provide high levels of iron. A single serving of oysters already provides 60% of our daily iron needs. Vitamin C, vitamin E, and zinc are other vitamins and nutrients found in oysters. Unfortunately, oysters are less frequent as compared to salmon and tuna since harvesting season is limited and is not available all year round.

When it comes to preparing oysters, it won’t be a problem if cooking is an issue—this is because oysters are completely safe to be eaten raw.

Clams are excellent sources of vitamin B12. One can get 84 micrograms of vitamin B12 in a 3-ounce serving of clams. This amount of vitamin B12 is equivalent to more than 1400% of recommended daily value. If this isn’t impressive enough, clams also offer tons of other vitamins and minerals—vitamin C, iron, zinc, manganese, phosphorus, potassium, selenium, and copper.

Scallops, which come from the same family as oysters and clams, are rich in magnesium and potassium. These two minerals are responsible for a multitude of physiological functions. One of these includes supporting heart and brain health—to be specific, these help in allowing the blood vessels to relax, managing blood pressure levels, and encourage blood circulation.

The nutritional benefits of consuming 3-ounces of scallops include 75 calories, 15 grams of protein, and less than one gram of fat. Preparing and cooking scallops is actually simple and does not take a lot of time.

We just gave you more reasons to eat seafood than you can shake a stick at. Think it’s time to diversify your protein and nutritional sources? Seafood is good. It’s definitely worth adding to your plate.